“Oswaldo Vigas is one of the true inventors of Latin American art. (...) He is one of those who have contributed the most to keep alive the “natural cultural tendencies” of his continent, which are, as he defined them in the AICA Congress in Caracas in 1983, “of pre-logical, magical, mythological, anti-rationalist character.” (...) Vigas has managed to carry out an original, personal synthesis, between these preserved “natural tendencies” and the latest plastic researches, creators of modernity.”

“His prophetic call translates the dream of each one of us, the promises of dawn pending a sudden transfiguration, the power of transmutation among all kingdoms, the inaccessible desire for enchantment.”

“The brilliant color, the firmness of writing, the deaf energies of a matter always in progression, create imperative dramatic tensions that Vigas keeps and exalts to the extreme limits of their resonances”

“Oswaldo Vigas’ art is marked with the totemic accents and the chromatic violence that seem to be the soul of the most expressive and passionate paintings of Portinari, Tamayo, Matta, Peláez and Wifredo Lam.”

“Vigas belongs to a noble contemporary lineage where I put all valuable Latin American artists who loyally followed a point of view, without accepting changes imposed from outside by the pressure of trends or the urgency of change. Each period of his work comes from the previous one by a formal and expressive need. Besides, there is not a linear progression between one painting and the other, a simple moving forward, but he often retraces his steps and his attitude and maxims return on other points of view.”

“Oswaldo Vigas uses the human figure as an archetype, a sort of ancestral imaginary where the female figure takes up a main place in this ancient and forgotten history about the origin of time before which the artist becomes the alchemist of myths and dreams”.

“The figures in “Brujas” do not represent superstition at all. They are real “angels and demons” in a sense that they communicate the pure state of our emotions as unconscious feelings or urges.”

“Entering Oswaldo Vigas’ studio is to penetrate a universe full of memories, full of references to Venezuelan and Latin American art history, of presences and absences, of pre-Hispanic sculptures and a grand piano; it is also finding paintings after paintings, properly arranged in chronological order, waiting to be displayed in an exhibition... They are his paintings (...). The female figure has dominated Vigas’ work at all times. He deforms it, he baroqueizes it, he deconstructs and reconstructs it, and then reinvents it with strong color strokes on the canvas. With giant stops, he goes forward in its development, he admits changes in each period, but always keeping his figurative axis; he darkens or lightens his palette; he replaces smooth surfaces with textured ones; dense matter and shapes are entwined into the space in a quasi-abstract expressionism close to the North American expressionist school, to the art brut and the CoBrA Group.”

“The flow between past and present remains a stroke that marks his recent work. The figurative memory that rescues remote links in dynamics with the present of art is an essential basis in his poetry. Oswaldo Vigas’ work is of prime interest to scholars of Latin American art history.”

“Beyond rational ambitions, beyond the cubist and constructivist heritage, Vigas finds the way of a return journey to dark knots where time goes back, while being vertiginous like a waterfall that goes back to its origins.”

“At this point in time, an art such as Vigas’ is presented with a particular clarity and urgency. For those who can read the dialog in his canvasses as a myth and an abstract gesture, between past and present and between the individual and the collective consciousness of a race, Vigas’ work offers an approach to a deeply poetic and human sensitivity.”

“There is something in Vigas that deeply binds him to the American land (...). There is a tenacious battle between the intellect and the Dionysian impulse even in his last compositions (...). He catches the human figure. He often opaques and distorts it so that it acquires brilliance.”

“Vigas’s painting has its own, non- transferable value as it assumes the great languages of contemporary art with an unmistakable attitude born from the tormented Latin American roots. So, Vigas’ painting is credible for discerning the essentially genuine and the inevitably alien, which it means something at the current times, because it is presented not only as an aesthetic paradigm, but also a paradigm of something that we may need more: an ethical paradigm.”

“To Oswaldo Vigas, the gesture of drawing as the act of painting, seems to envelop a troubled and sacred character in the shadows of a secret buried mysticism.”

“There is a very attractive dominated tension in his recent works. A deaf palette, a solid, well-crafted matter, and a strongly architectured construction.”

“A violently gestual and strongly tempestuous painting whose stormy outbursts impress us. His paintings react to a telluric unit held by an irresistible creative capacity.”

"Influences of Cubism, Expressionism, Constructivism, and Informalism are evident; portraying an artist consistently reconsidering established approaches to painting, and integrating them into his practice.(…) Never adhering entirely to figuration or abstraction, or to any particular school of thought, Vigas’s later works employ elements of many."

"One of his innovations was to presciently, precociously mingle Venezuelan indigenous traditions with European and American modernism, the prehistoric, mythological and anti-rationalist sharing space with the formal, the geometric and the ordered. His curiosity was boundless, deeply influenced by pre-Columbian fertility figurines, African sculptures, 17th-century Spanish masters, the School of Paris, CoBrA, abstract expressionism, neo-expressionism and more, with no self-imposed off-limits sign to restrict his inspired, idiosyncratic jumbling of cultures and chronologies."

“Both in substance and in form, the gray scales or the raw canvasses that dominated in earlier periods disappear to give life to the green, red and yellow, the colors of the tropics. It is the bustling life, characteristic of the Caribbean culture that is present.”

“As an ancestral imperative mandate, Vigas seems to assume the notion advocated by Torres García in his paintings: to make a virgin art but penetrated by the essence of every land to reach unification, in the diversity of all the art of the continent.”

"As much a booster for his country's artistic offerings and legacy as he was a bridge-builder across continents and cultures, Vigas is remembered today for the broad scope of his accomplishments, the adventurous spirit of his art-making, and the vigor with which he pursued a richly creative life."

"Vigas was an artist in the purest sense. ’He was interested in creating,' says Lorenzo. 'He was not interested at all in spending time promoting, just being an artist.'”

“Vigas has his own mystery, his own lines, his own colors. He paints with a passionate depth, with torn sensitivity, looking the oldest expression of our land through modern lines. (...) I am among those who believe in the future of this young Venezuelan painter.”

“Telluric and phantasmagorical matter take up the retrospective odyssey of the American man in the pursuit of his origins every day in Vigas’ paintings."

“Vigas’ evolution goes from a painting that recreates natural forms retained in the subconscious up to art concepts which purpose is to act in the same manner of perceptual impacts on the viewer.”

“Vigas does not kill spontaneity in his work. He loses his arm, he is carried away by nature, the paintings seem to spring from his fingers, the colors come out of his bloodstream, the strokes are a true reflection of the turns his spirit achieves.”

“In Vigas’ sculpture... the abstract condition of its surface, the skin that covers it, consists of smaller marks that make a textured whole. The body is the container. The surface is the skin of a three-dimensional corporeal volume that calls for contemplation when combining mental and emotional states.”

"Oswaldo Vigas. Anthological 1943 – 2013” traces Vigas’s career, and his talent. His strong, gestural strokes seen in the 1963 abstract painting “Bestiario”, measure up to the works of his more famous contemporaries. Vigas’s Hierática series convey the strong, geometric forms of the constructivist period, while the 1947 painting “Desnudo”, an abstract nude, shows his appreciation of the female form. "

“Vigas was an incredibly versatile and multifaceted artist,” says Katja Weitering, CoBrA museum director and co-curator of the traveling retrospective “Oswaldo Vigas: Anthological, 1943-2013.” “He was a true modernist, establishing a new art drawing from both personal, ancient and contemporary sources.” June, 2016

“…a towering ﬁgure in Venezuelan modernism—an artist who bridged the gap between pre-Colombian iconography and the experimental art movements of the 20th century” From the @hyperallergic, by Barbara Pollack on Oswaldo Vigas: Transformations. July 2018 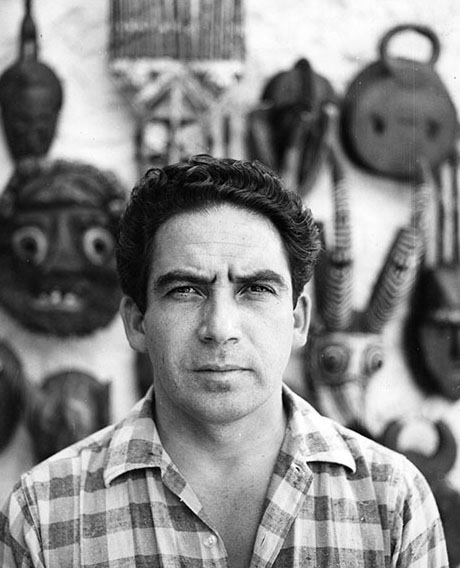