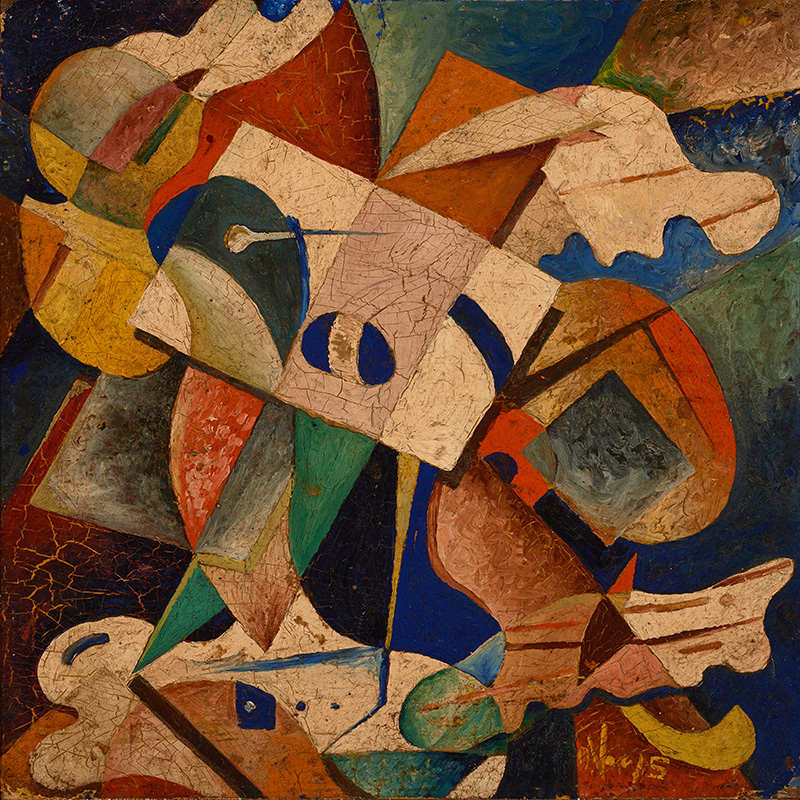 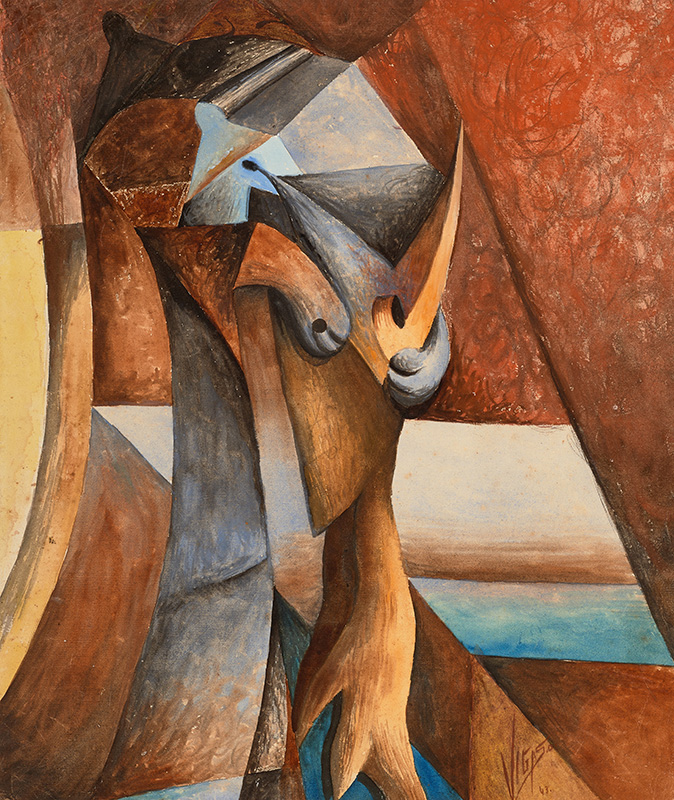 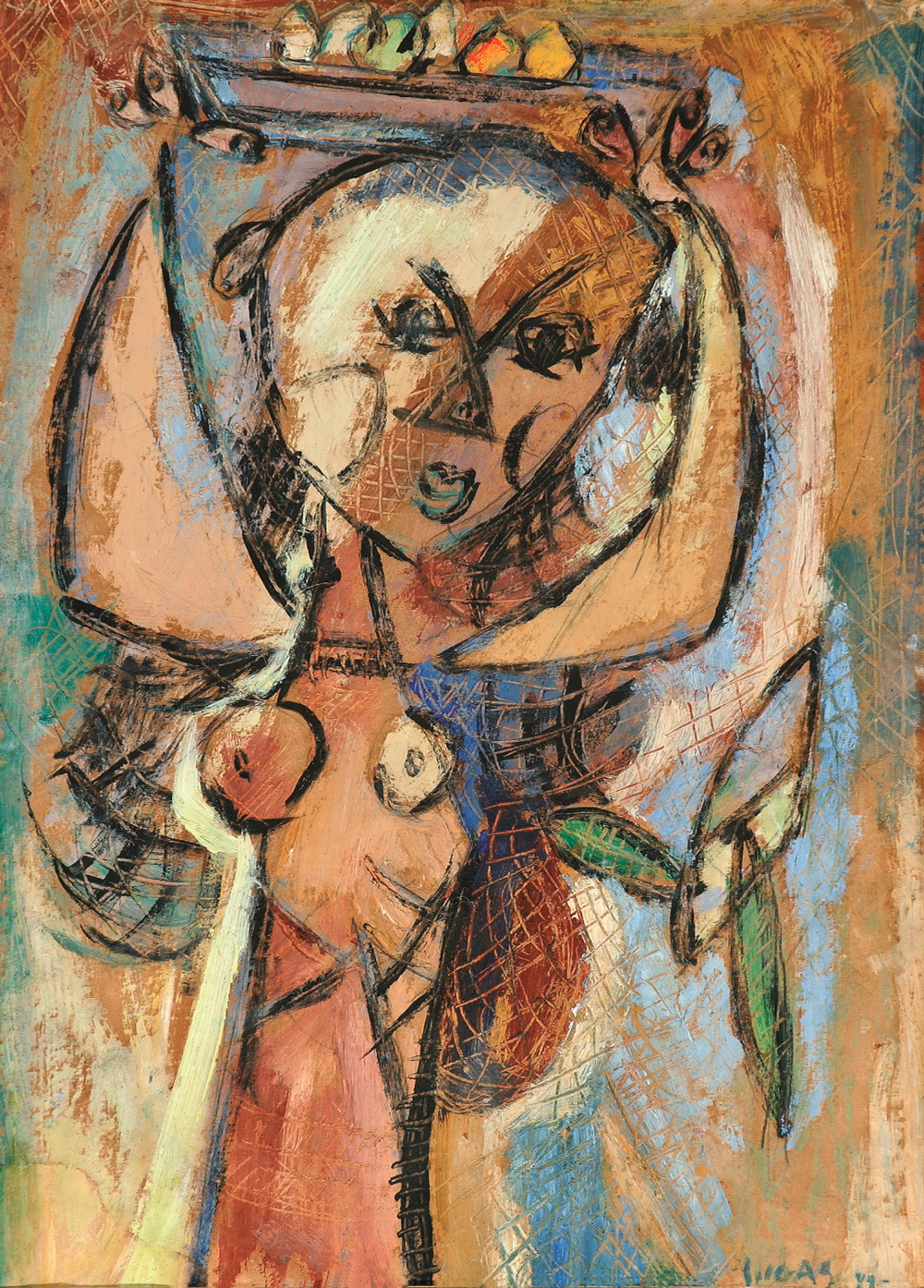 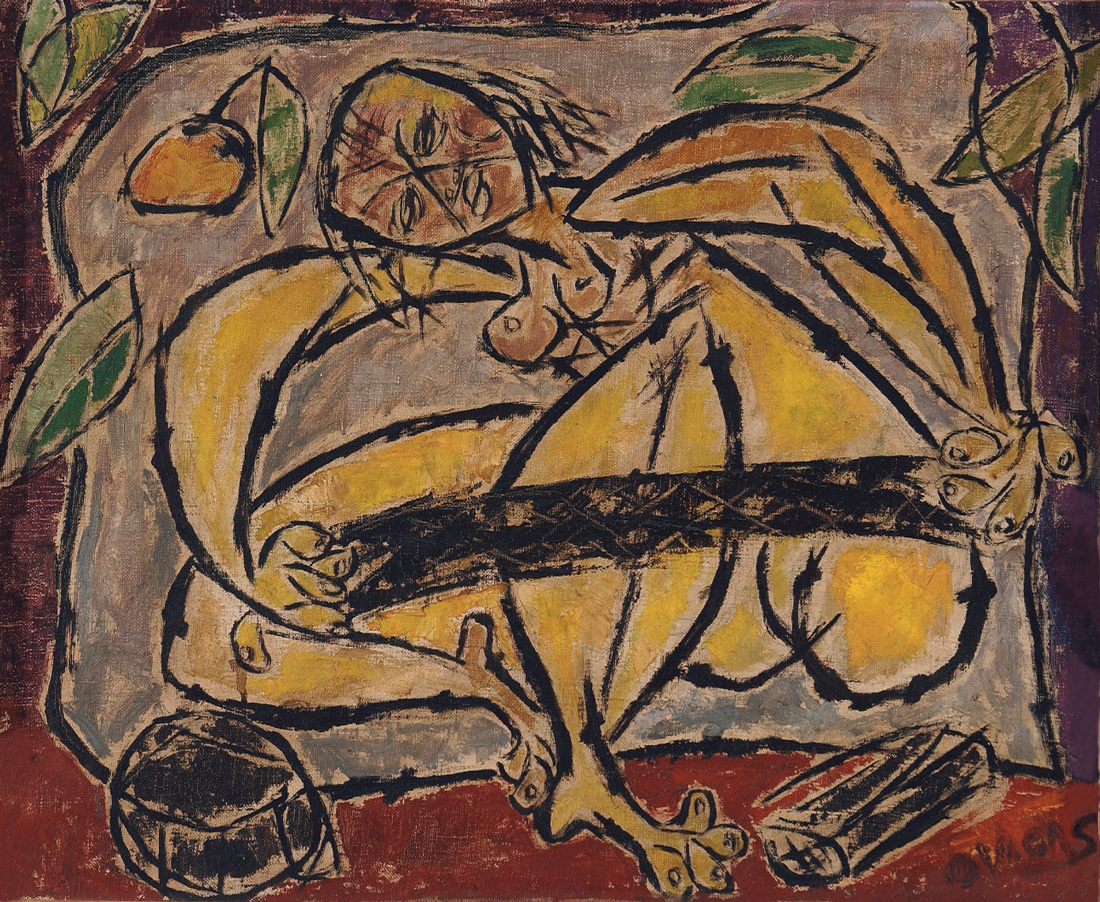 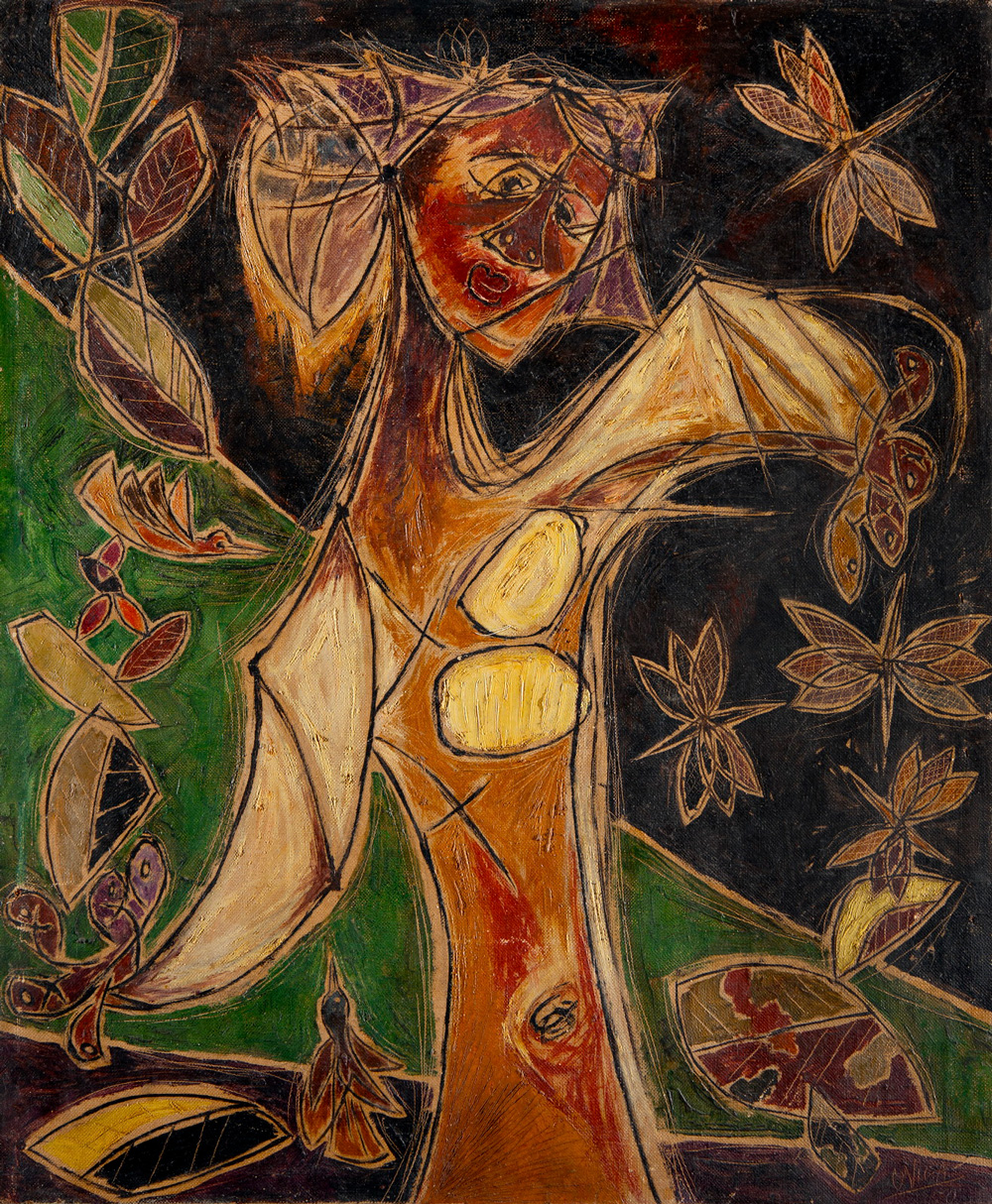 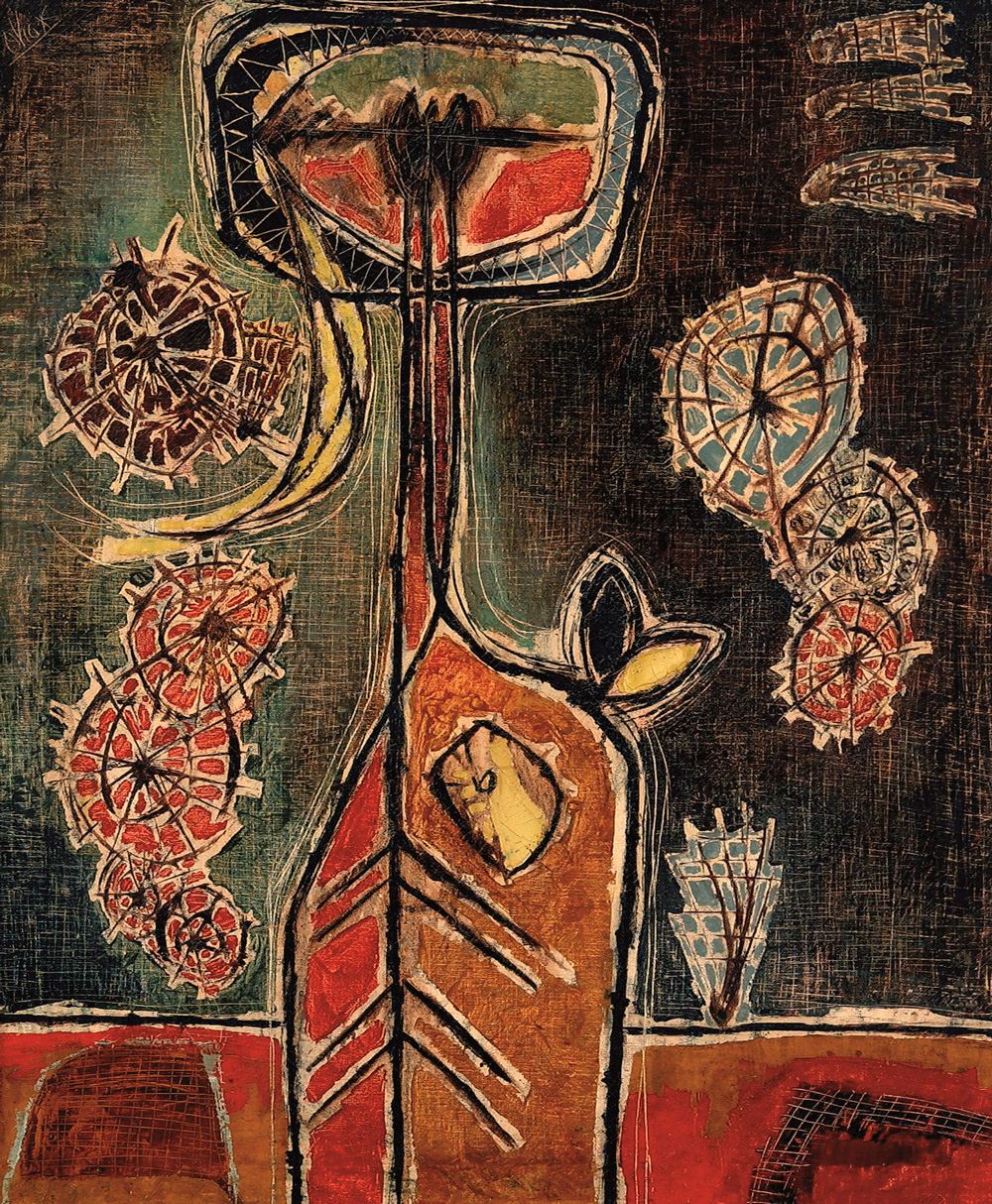 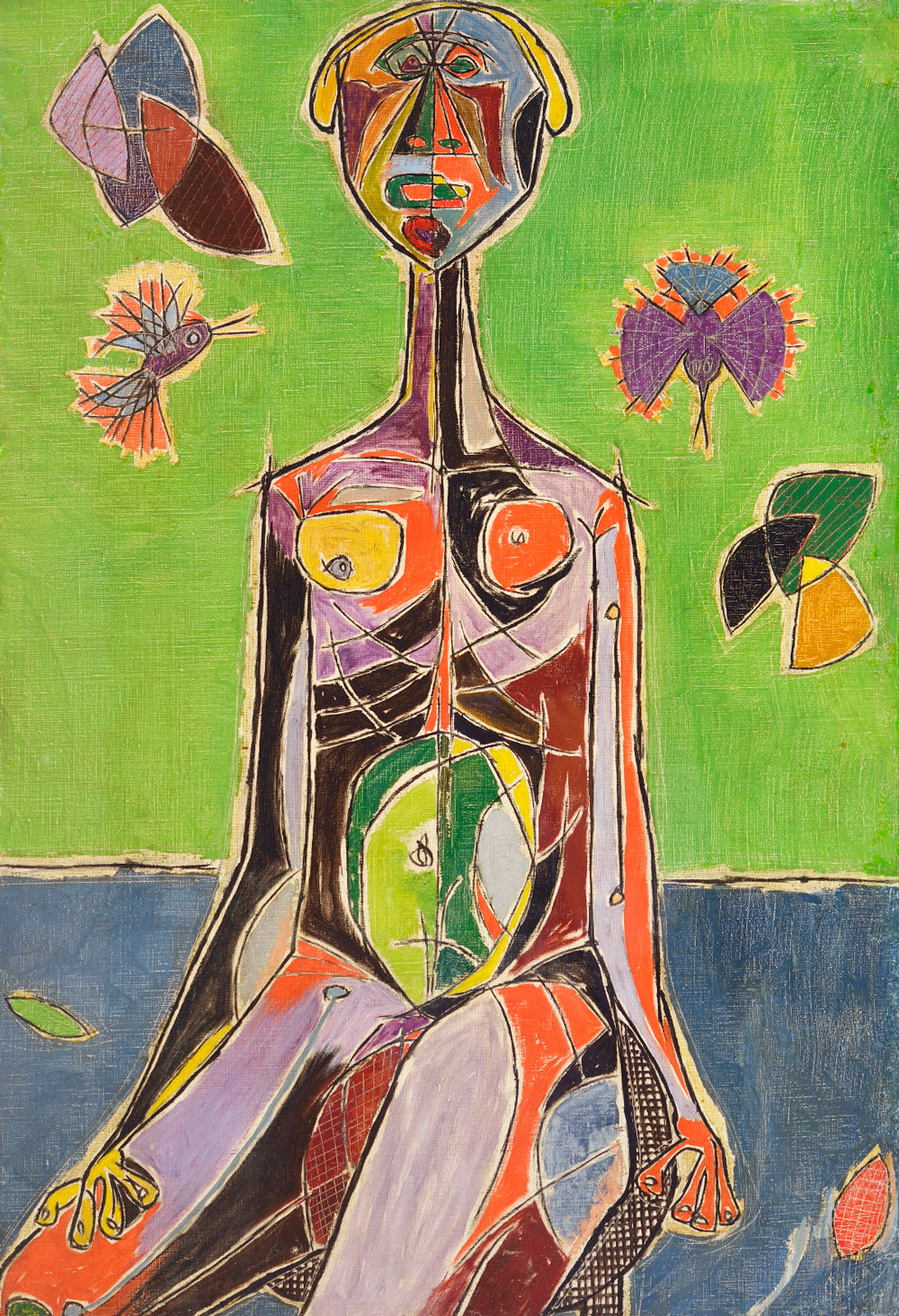 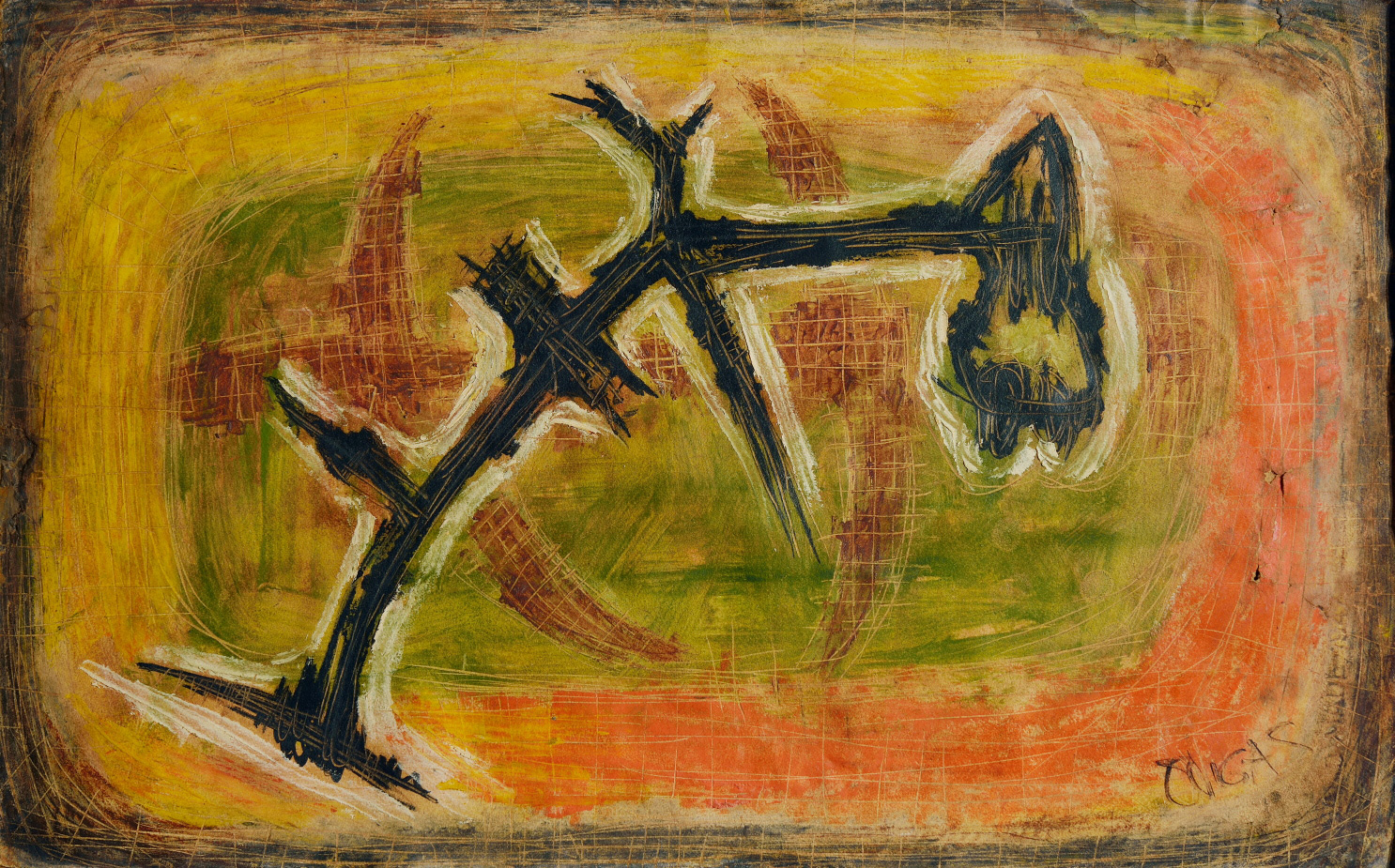 “Every day I am more convinced that the most
important asset of contemporary art is the
opening of a path to the archaic past.”

The personal language that Vigas developed In his early years reflects an artistic imagination pulsing with numerous and diverse influences, both abstract and figurative. Born in Venezuela in 1923, the son of a doctor, Vigas began drawing and painting on his own as a young man, before starting formal studies in medicine. Inspired by the exciting strains of modernism that were then in the air, Vigas was swayed in particular by cubism and surrealism, and began painting human figures – mainly women—that were somewhat geometric, defined by strong black lines and dramatic contours. Prompted also by a search for his mestizo identity, Vigas was determined to create an authentic artistic imagery that remained faithful to his own values—a search that would lead to a long and prolific career framed within a private but richly expansive mythological universe.

The images Vigas created during these early years portray mythical creatures derived from snakes, birds, and the like, with fanciful elements that were inspired by vegetation, such as leaves and flowers, set into scenes populated by monumental beings of decidedly solid shape and form. The fantastical depictions of human and animal figures that Vigas created during this period comprise raw brushstrokes and strong lines, influenced by his attraction to pre-Hispanic representations and artifacts, including the pre-Columbian Venus de Tacarigua figurines that were discovered in the region where Vigas was born. His fascination with female deities, divinities, and demons sent him on exhaustive travels throughout Venezuela, as did his interest in African figurines and masques. Notably, Vigas was the first Venezuelan artist to draw upon the country’s then-slighted pre-Columbian and African cultural patrimony, to lend depth and amplitude to an artistic practice that also included European and American modernism.

During these early years, Vigas found abundant inspiration in a thematic thread that he would return to again and again: witches. As art historian Marek Bartelik wrote in his essay “Painting with a Duende,” “Vigas’s women are bloodthirsty goddesses, horrifying demons and ghosts, and deceptively anthropomorphized insects and plants with spiky, skeletal torsos, having sexual organs attached to them. Their huge rectangular heads resemble those of giant turtles. Each of these grotesque beings seems to claim a distinct demonic personality: the unmerciful lamia of Bruja de las libélulas (‘Dragonfly Witch,’ 1950) [1]

In 1952 Vigas won Venezuela’s prestigious National Visual Arts Award for his paintingLa gran bruja (“The Great Witch,” 1951), which positioned him in the art world as a true modernist working with a distinct and highly personal visual vocabulary. It was this prize that enabled Vigas to move to Paris in 1952, where he would study and paint for the next twelve years, while mingling and showing work with the many of the most important artistic luminaries of the time, including Picasso, Matisse, Leger, and Magritte.

[1]Bartelik, M. Essay "Painting with a duende: Notes about the life and work of Oswaldo Vigas" (2013). To be included in Oswaldo Vigas. Edited by the Oswaldo Vigas Foundation. Editorial Planeta, Barcelona, Spain. Coming in 2015.