Oswaldo Vigas did not have the opportunity to establish a friendship with Asger Jorn (1914-1973), but this Danish artist certainly must have been an important reference for him. It should be noted that, in the art world, there is often a natural empathy between artists who share esthetic concerns as well as the “spirit of the times.”

Despite the generation gap– Jorn was nine years older than Vigas– and the fact that they came from different geographical and cultural contexts, the two artists shared an understanding of plastic expression which, in a certain way, connected them. Both of them opted for expression that was markedly free– first through a figuration close to that of the Surrealists, then through a violent and expressive use of gesture.  Jorn explored the latter during and after his participation in the CoBrA group; Vigas did so from the ‘50s and especially during the ‘60s.

Both chose to leave their countries in order to interact with the world. Jorn left Denmark in 1936, and alternated between living in France and Denmark, while traveling to other countries; Vigas left Venezuela in 1952 to settle in Paris, where he stayed for twelve years. It was important to both artists to realize that their respective cultures, the Scandinavian and Latin American, were isolated from the international art circuits. While they both valued contact with various manifestations of European modern art, they also maintained a strong awareness of their own condition as artists. Each reached the conclusion that he was no stranger to his history and culture, so that his work had to express his origins accordingly.

This realization matured along their respective creative processes. Jorn was, during the ‘30s, a young expressionist painter whose work conveyed a dramatic interpretation of reality that was supported through color. During his first stay in Paris he was influenced by French Surrealism, as led by André Breton, as well as by the so-called “revolutionary Surrealism” that was brought from Belgium by the poet Christian Dotremont, whom Jorn met years later. At the same time, he was inclined toward abstract forms and the Dada spirit, while receiving lessons from an artist he greatly admired, through whom he learned how to rationalize and structure his work, Fernand Léger. Vigas, on the other hand, still in Venezuela during the ‘40s and with no models to refer to directly, felt drawn to free, dreamlike figuration. During this early period, he tended toward Surrealism. Shortly thereafter, he began painting his first “women” from which the Brujas series and other female figures derive. A sense of freedom prevails in both method and concept, in these works. In 1952, Vigas’ painting becomes stylistically more constructivist, without losing a direct reference to the organic, both animal and vegetal, and it is this period of Vigas’ work that affords a clear resonance with Jorn’s fantastic bestiary. This is possibly the result of parallel internal debates in both artists between the rational and the unconscious. Certainly, both adhered to the principle that a complex image—a hybrid being, for example– can have multiple meanings. Thus, they both cultivated an open imagination that incorporated symbolic elements from their ancient cultures. Vigas achieved this in relation to his mythological conception of the origins of life; Jorn achieved it in his mythologization of reality and the discovery of relationships between things. The truth for both of them is that the return to origins implies the recognition of ancestors. Both artists were interested in his native country’s “natural” arts, not so much to promote stylistic renewal, but to amplify the motivation to express, according to Jean-Clarence Lambert, transhistorical or universal spiritual values.

In addition to the proliferation of hybrid figures and the process of mythologizing deeply present in the practice of both artists, there are other stylistic empathies between them. Between 1958 and 1964, Vigas went through an informal period in which he created exceptionally abstract pieces, then he took up figuration once more, never to abandon it again. It is during these years when he creates his Personagrestes series (1963-1964) with free and spontaneous gestures, showing figures demarcated by thick and dark brushstrokes, in an expressive style close to what artists like Appel and Jorn were doing.

Vigas then painted the Maria Lionzas series (1965-1967), in which he takes up the theme of the woman. The series also represented the fabulous creatures that he continued reinterpreting throughout his career: bestiaries, earthlings, ominous birds, and more, all adding to a hybrid configuration in which the human, the animalistic, and the vegetal are integrated within an explosive and vital style.

We see a similar energy and virulence in Jorn’s work, in which he draws from his figures an evocation of the wildest and most naive state of human nature. As in Vigas, Jorn’s painting formally presents a tension between abstraction and figuration, an expressiveness that derives from the Scandinavian artistic tradition, especially that of the painting by the Norwegian Edvard Munch.

In short, Vigas and Jorn recover values that are characteristic of​​ their respective cultures. They do it with vigor and, above all, with freedom. Both take perspective from Renaissance humanism, heir of the Greco-Latin tradition. This means forgetting hegemonic artistic styles, including the novelties of European vanguards, in order to focus on their own forgotten cultural traditions: the Scandinavian, on one hand and the pre-Hispanic on the other, among other traditions. This interest in native or “natural” cultures implies, basically, a challenge to the standards imposed by the academy—which is why gesture in the paintings of Vigas and Jorn becomes so important. In Jorn, this happens during and after his CoBrA experience; in Vigas, it happens notably from the ‘60s onward. 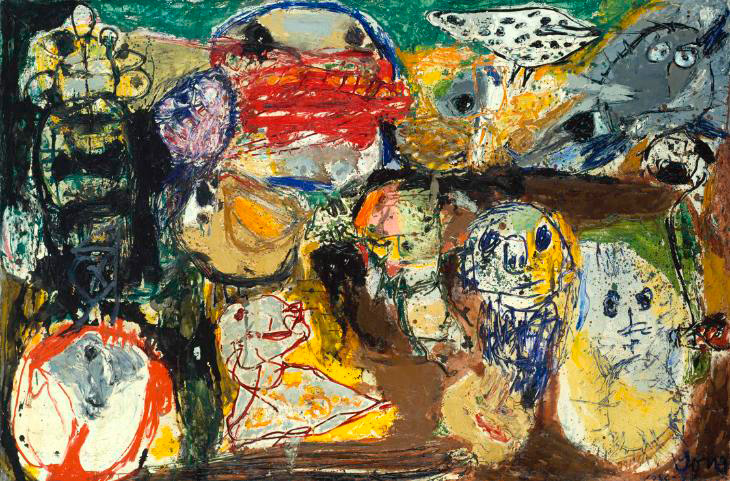