It was expected that the Museum of Modern Art’s 1984 exhibition Primitivism In 20th Century would cause strong criticism in the Latin American cultural milieu. One of the chief critical voices was that of the Peruvian artist Fernando de Szyszlo (born 1925), who in 1985 issued a statement noting the Museum’s discriminatory policy toward Latin American art. Vigas, also outraged, wrote an article in the El Universal newspaper entitled “Lo de ellos y lo nuestro” in May of the same year, which decried the absence of pre-Columbian art of the American continent in an exhibition meant to show the relationship between modern art and expressions that were called “primitive.” Vigas said that this was due to the prejudiced and ignorant view that the United States had of the southern hemisphere.

Such criticism was justified. Many Latin American and European modern artists had incorporated qualities of the pre-Hispanic arts into their creative processes. Vigas and de Szyszlo are only two of them, and their works sought to transcend mere formal appreciation. Both were interested in searching through their roots to encounter the sacred background that many of the pre-Hispanic pieces have, and both attempted to express qualities of this nature in their own modern styles. Said de Szyszlo, “I think painting has a mystical communication…  The sacred is the inexplicable, which is above us; we cannot see it and yet it makes us truly exist.”

When de Szyszlo went to Paris in 1949, he had already assimilated pre-Hispanic art in his artistic practice. He had even experimented with a Peruvian primitive technique taken from the ancient Chancay culture. He carried this cultural connection in his blood, and it linked him with the explorations of abstraction by contemporary artists like Arp, Janko and Poliakov. But he was still in a period of relative conformity until 1959, when he attended an exhibition held in Mexico and saw the path to follow for the rest of his days. It was then that he encountered the deeply and distinctly Latin Americanist work of Rufino Tamayo. About this artist, de Szyszlo confessed, “In those wild colors, in this mysterious world, I discovered the origin, and that being modern meant going to our roots...” In other words, being an artist did not necessarily mean going to Europe and looking beyond one’s self, but discovering the true wealth that exists inside.

It is this certainty that has allowed the great Latin American masters to transcend time and place. It is clearly visible in Oswaldo Vigas, who despite his youth went to Europe with some very definite opinions. While he was flexible and open to change, his opinions were a result of his maturity, not of external trends. From 1948, when he attended the Taller Libre de Arte in Caracas, Vigas conceived of his painting as an expression of his identity, which somehow meant assimilating the pre-Hispanic past. This determined not only his particular iconography, but the consolidation of his symbolic language in figures, graphics, signs, and ideograms. His travels through the Venezuelan landscape during the ‘50s led him to identify even more strongly with traditions of the people he found there. There is no doubt that Vigas persisted in creating characters in both his early and mature work. Some of these characters were taken from everyday life– they seem to come alive, forming certain social groups even as they belong to the artist’s fictional world.

Perhaps therein lies a big difference between Vigas and de Szyszlo. While Vigas animated his characters through a specific quality, as in the Brujas, Personagrestes, María Lionzas, Prestidigitadoras, Curanderas, and so on, de Szyszlo processed his figures through an intentionally ambiguous language between abstraction and figuration, as parts of, or accents in, a vast territory or landscape that usually dominates the pictorial surface. This process is what led Mario Vargas Llosa to note that de Szyszlo creates “a flexible and mystifying world, suitable to signify a strange reality, America.” This explains why painting embodies the “materialization of the sacred” and why the land has such an important role in the soul of Latin America. When Vigas arrived to Paris, he took the experience of his travels to Barlovento and Yare with him, as well as those to Siruma and Paraguaipoa in the Guajira, regions that still retained many of their ancestral modes of expression. He took, for instance, his memory of Wayuu fretwork designs, applied to that culture’s weavings and body paintings, and used it to develop the fretwork he employed in many of his paintings.

This way of belonging to a place signifies the vision and sensibility of an artist, and it was certainly a crucial part in the deep friendship between Vigas and de Szyszlo. When they met in Paris in the ‘50s, it was at the request of the Peruvian poet Blanca Varela, who then became de Szyszlo's wife. After that, the artists had the opportunity to participate in several of the same exhibitions: at the Forum Gallery in Lima, in 1978; in Pintores Contemporáneos at the Galería Acquavella in Caracas, in 1986; in the International Fine Arts Competition in Ancon, Peru, in 1987. The transcendent power of art united them; poetry did too, undoubtedly. De Szyszlo belongs to the Peruvian Academy of Language and is a passionate lover of literature. Vigas was a poet. He wrote throughout his life-- an activity he alternated with drawing. Today, two beautiful collections of Vigas’ poems remain: Mis dioses tutelares and Regreso de la noche, published in 2007 and 2008 respectively. 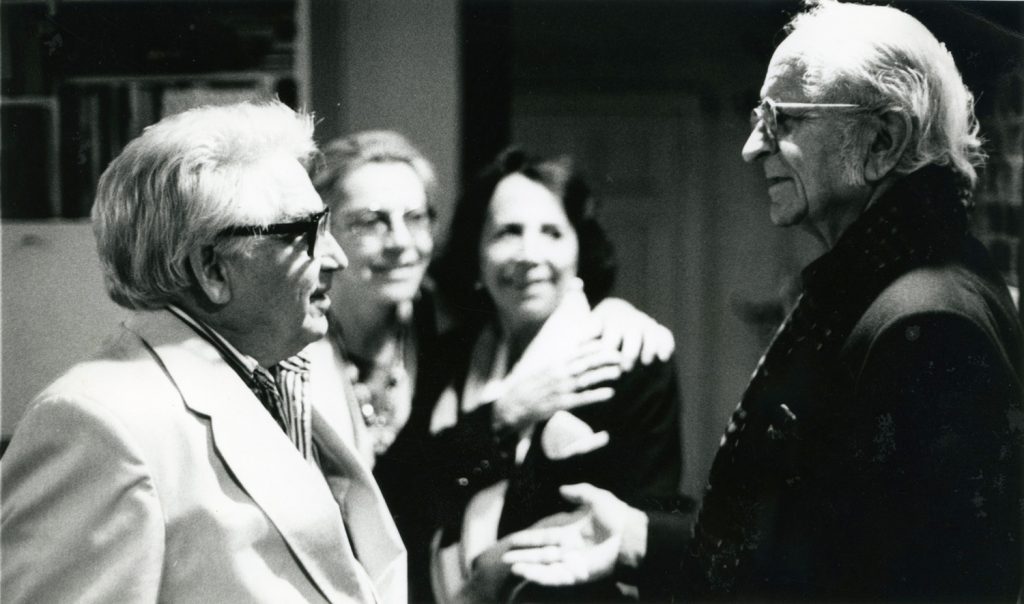 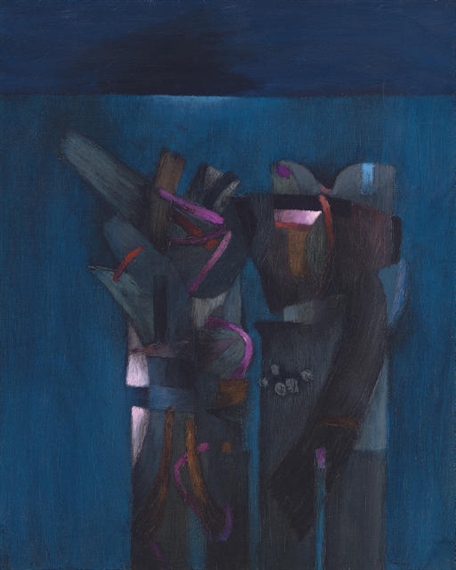